Subscribe to our newsletter.
Join the Tagmate Family to get latest updates and blog recommendations every week.
Thank you! Your submission has been received!
Oops! Something went wrong while submitting the form.

What is the buzz about Server Side Tagging: The ‘Cookie’ connection 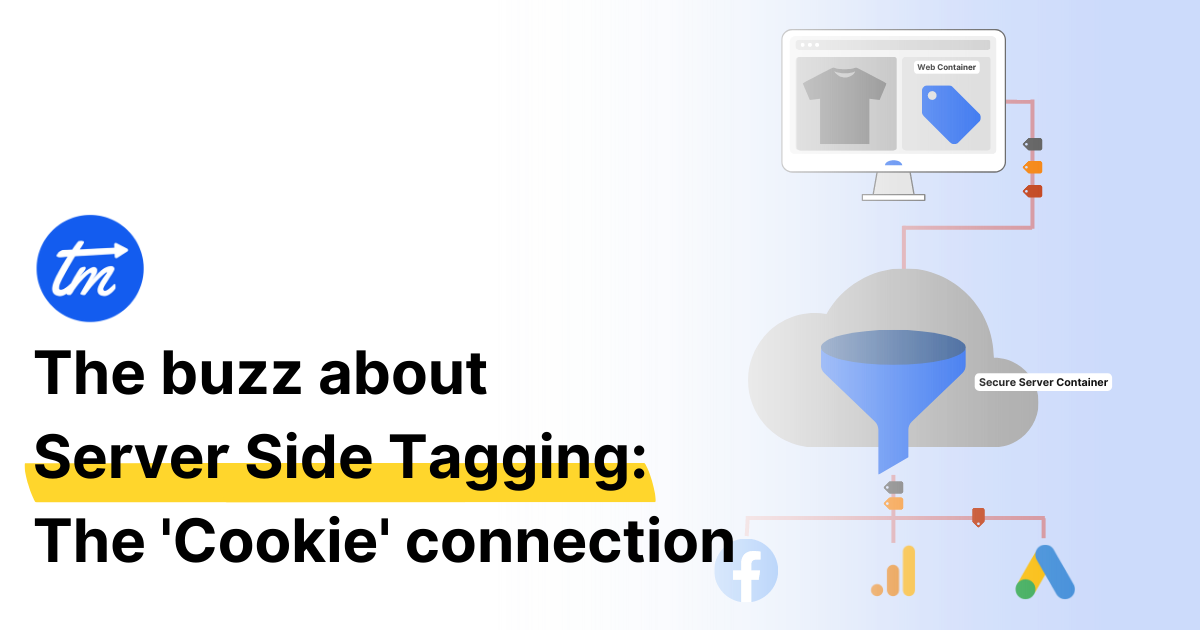 In January 2020, Google announced that it will phase out third-party cookies in 2022 but ultimately postponed it to 2023. After lending cookies a gasp of breath, it again pushed it further away in the second half of 2024. However, third-party cookies will be phased out sooner or later, thereby creating one of the biggest landslides in online advertising.

This article is the first installment of Tagmate’s three-article series on server-side tagging (SST) and today, we will discuss how the absence of a proper solution led to the advent of SST which will help you navigate your way through the seemingly dark, ‘cookieless’ internet.

If you are a publisher or a marketing agency, you might have heard about this quite a few times but probably, but you might have adopted the ‘wait and watch’ tactic.

Also, we will cover what everyone is doing in the face of a potential tracking attribution blackout. Finally, we will consider a real-life example to understand the seriousness of the issue.

Let us get started:

Cookies are small pieces of data sent by websites to be stored on your browser and are meant to optimize your user experience on a particular website.

Theoretically, it also optimizes your browsing experience throughout the internet as long as you are using the same browser and that’s where things start to get bothersome for users.

But before we jump into the details, let us get a brief overview of how cookies are classified.

Here’s a snapshot of the first-party vs third-party cookies comparison:

Before we jump to the next section, let us understand the major differentiator between first and third-party cookies.

Personalized monetization or personalized advertising operates on the basis of inventory offered in the open market by publishers and it doesn’t factor in the user consent.

However, one must understand that first-party cookies aren’t all rainbows and sunshine either as they allow an entity owning multiple domain names to use the data generated by first-party data.

Consider the case of Luxottica which is a less-known conglomerate that owns almost every luxury eyewear brand including Ray-Ban and Prada. If it collects first-party data from either of the websites, it can share it with all daughter concerns without the user expecting the same.

This gets even trickier with corporations like Berkshire Hathaway and Blackrock that have a portfolio in diverse sectors.

On June 5, 2017, Apple announced the rollout of a new privacy feature called Intelligent Tracking Prevention (ITP) for Safari browsers and iOS. It later announced ITP 2.0 at Keynote Conference WWDC 2018 which was co-developed with Webkit.

ITP 2.0 and advanced versions effectively remove the 24-hour access window by partitioning cookies into the first and third-party origin, followed by purging third-party cookie data. This made a humongous negative impact on many adtech and martech entities including Facebook.

iOS 14 also added to the misery of Meta with Apple's App Tracking Transparency Framework (ATTF) allowing users to block tracking across apps/websites upon downloading an app from the App store.

Browsers like Mozzila, Brave, Vivaldi, and DuckDuckGo have historically taken a proactive stance against third-party cookies and they enable their users to block them in a quick and simple manner.

Ad-blockers and ant-tracking programs have been widely used to deter third-party cookies from collecting user data while most browsers empower users to safeguard their privacy.

Google Chrome and chromium-based browsers like Microsoft Edge, on the other hand, have a predefined timeline for the full ‘cookie apocalypse’ despite a few delays.

But one must take these developments with a pinch of salt as none of this is purely based on goodwill towards user privacy. Have a look at the below infographic showing major legal frameworks and judgements that indicate the law makers’ approach to third-party cookies:

Having said that, one must note that Chrome has the biggest user base among all browsers, and cookies facilitate a major chunk of Google’s revenue via remarketing ads and Google’s flagship search ads.

Therefore, it is understandable that Google is delaying the Cookie Apocalypse till it finds a reliable, legally compliant technology stack to replace cookie-based digital advertising.

Notably, the search engine stalwart has signaled that it won’t support identifiers developed by other firms, adding to the troubles of the already stressed yet lethargic adtech-martech industry.

What are the industry players i.e. publishers, agencies, and ad tech players doing about it?

To begin with, there are a number of ways the industry is approaching Cookie doomsday, with Walled Gardens being one of them. An ecosystem that controls buying and selling of inventory, tracking, and reporting analytics.

Google and social media apps are among the best examples of the walled garden as they provide an end-to-end ecosystem.

On the other hand, the likes of the Washington Post rely on Premium Outlets i.e. the use of consented IDs and clean rooms called Unified ID 2.0. This is also a highly effective solution for long-tail publishers that are confident about their content quality and want monetization in their hands.

Verizon media also developed its own solution to the identification and attribution called Next-Gen solutions (Verizon Media ConnectID) while others like Epsilon CORE ID, Unified ID 2.0 by IAB, LiveRamp Authenticated Traffic Solution (ATS), Merkury from Merkle, BritePool, Neustar Fabrick, and ID5 Universal ID are also some of the promising solutions.

Google itself tried approaching the situation with the help of FLoC along with six other projects to ensure that its revenue doesn’t suffer after it pulls the plugs off the cookies.

Despite these developments, we can safely say that there is no real response from the industry. Everyone right from adtech and martech tools to advertising agencies and businesses that leverage digital ads is sitting on the fence.

While it is a known fact that cookies will go out of use sooner or later, the absence of a credible, universally accepted replacement has resulted in a ‘wait and watch’ policy across the ranks and files of the online advertising landscape.

Meta is one of the most popular avenues for running paid ads with 115 billion+ spent by various advertisers last year.

In order to attribute the transactions, website owners place a cookie called Facebook Pixel which allows them to identify the traffic that landed via Facebook/Instagram ads and successfully completed the transaction.

This is the basis of all ROI-related metrics when it comes to Meta ad spend, without which, advertisers will be in the complete dark regarding the revenue generated.

Consider this scenario for an advertiser working with Meta without third-party cookies:

A shoewear company called Zector that hired WebSea, an advertising agency to handle its digital marketing. Facebook and Instagram performed significantly well in the past, making social selling an important revenue stream for Zector.

If third-party cookies stop working, Facebook Pixel will no longer be able to track a user landing on Zector’s web store or any purchase made after watching a FB/Instagram ad.

Also, ad personalization will no longer be possible, causing scenarios like:

Instagram showing ads for brogues to a football player looking for new cleats online. Naturally, it will be of no productive use for either the targeted individual or the advertiser since purchase intent doesn’t exist in the first place.

Also, Instagram won’t be able to identify and track Zector’s ‘target audience’ across apps and websites, thereby leading to situations where it will constantly show the same ad across all devices and browsers.

On top of that, analytics won’t be able to attribute the channels or touchpoints that were instrumental in the conversion. This will effectively reduce the quality of insights generated as there will be undetected gaps in the conversion cycle which could also potentially mislead marketers in many cases.

This will lead to situations where:

That’s a catastrophe for both Meta and advertisers with the latter being forced to reallocate their budgets to activities that generate attributable results.

In fact, adtech and martech tool vendors will face severe repercussions as they won’t have suitable data to train their machine learning algorithms.

Towards the solution: Server Side Tagging

Interestingly, Google itself came up with a promising solution (unsurprising, isn’t it!) and it appears to be highly promising

Known as Server Side Tagging (SST), it is an ‘optimistic middle-way that has something positive for all tenants be they users or advertisers.

We will discuss SST in greater detail in the next post of this series to help you understand why SST is the game changer for all of us.

Thankyou for subscribing.
Oops! Something went wrong while submitting the form.

Set up tags in seconds.
Not days.